Exactly three months after its last issuance, THFC priced a £131m tap of its 32 year THFC Funding (3) deal today. The transaction was lead managed by Royal Bank of Canada and Royal Bank of Scotland and was for thirteen underlying borrowers. The credit spread on the deal at 2.05% was inside the majority of recent own name issues, reflecting over 200% investor demand for the deal and delivered a yield of 5.37%.

The transaction was spread across a wide range of borrowers. Given recent interest in a ‘Welsh Bond’, the largest single group of participants were Welsh borrowers: five HAs in this deal added to the three in THFC ‘s last transaction. THFC has allocated a total of £68m in 30 year + funding to Welsh Borrowers in the last three months.

“We have a long track record of funding Welsh HAs stretching back to our first deal in 1990. They see us both as a consistent provider and as a speedy, cost effective route to market” Said Piers Williamson, THFC’s Chief Executive. “In a sector focussing on value for money, we can evidence repeated delivery of low cost deals – even for relatively small participations”. The deal also saw the second drawdown in a phased programme for the G15 member: Network Housing. 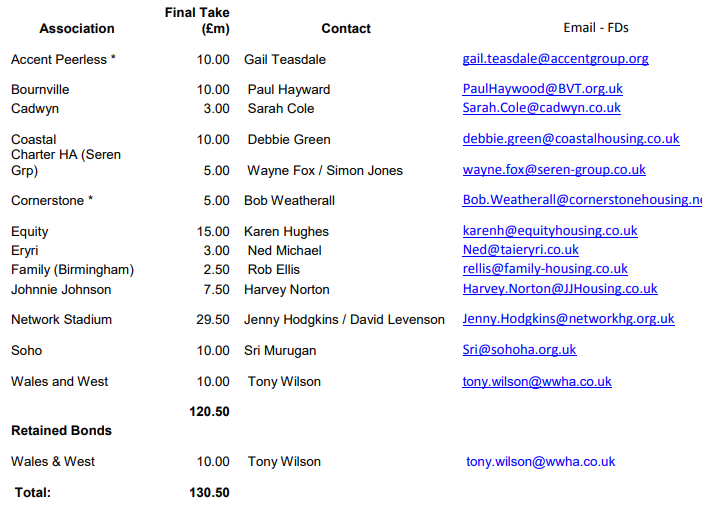 THFC have followed up the initial £500m guaranteed EIB bank loan to Affordable Housing Finance (“AHF”) with a £208m debut.