THFC Cranks up the volume

THFC priced the fourth tap of its 30 year bond today at 4.31%. The £55.2m tap issue brings the total outstanding on THFC Funding 3 to £544m – underlining its position as the largest Housing Association Bond. THFC also took the opportunity to sell a further £25.5m of previously retained bonds.

At 4.31% for 30 years, this is one of the lowest ever rates for long-term borrowing achieved by UK Housing Associations and beats by nearly 0.90% the cost of funds achieved by THFC’s rival, GB Social Housing only 3 months ago. However, the retained bond drawdown is the real story and it is smaller housing associations that are reaping the benefit of flexibility. Large Housing Associations issuing typically £200-300m bond issues incur a so called ‘cost of carry’, earning low deposit rates while they wait to allocate the bond proceeds to their development programme spend.

“ With big Associations, having large amounts of bond proceeds awaiting use is like having money burning a hole in their pockets” said Piers Williamson, Chief Executive of THFC, adding: “We have delivered flexibility for HAs to draw down funding as and when they need it”.

Six borrowers, including four Welsh HAs have utilised retained bonds . Network Housing, a G15 Member, have been the largest single user of THFC retained bonds (£30.5m) and by phasing their drawdown to more fully match their development spend are estimated to have saved £5.7m over the course of the last 18 months.

After last year’s glut of just over £4.4Bn of public and private issuance, the vast majority of the Affordable Rents programme has now been funded. Total Q1 2013 bond issuance by Housing Associations was 16% of 2012 levels. THFC’s tap, with an average of £5m per borrower, also reflects lower incremental needs.

Demand for THFC’s deal, which closed comfortably over two times subscribed, despite its low yield, show that Investors have fully discounted the Moody’s downgrade and Cosmopolitan issues.

“We road-showed over 20 accounts” said Williamson “It’s felt a bit like overkill, but investors were keen to have an up to date view on regulation as well as welfare reform”.

THFC Funding 3: How the Issue grew to be the largest HA Bond 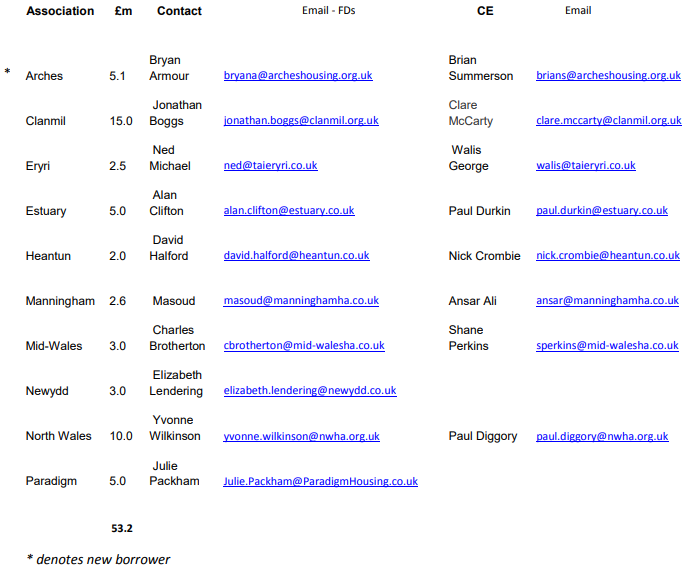 As Safe as Houses: Are housing associations as good an investment opportunity as utilities?

Key points: UK housing associations share most of the attractive investment characteristics of regulated utilities and are generally rated more.