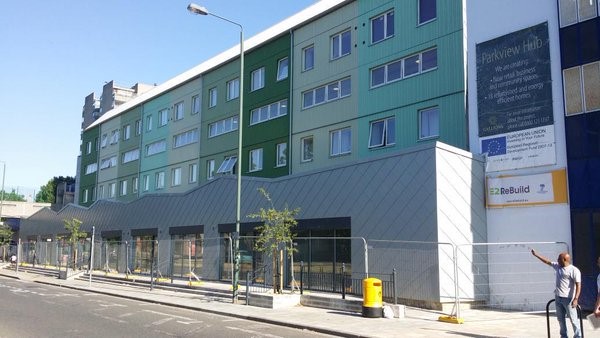 In London, the JESSICA London Green Fund was established to make investments consistent with the London Plan, allocating £12m to finance investments in energy efficient retrofit of existing social housing under the Greener Social Housing UDF.

THFC was selected to on-lend these funds to finance eligible urban projects which form part of an integrated plan for sustainable urban development. THFC provided loans through the JESSICA initiative to a select group of housing associations which displayed a particular strength in improving the energy efficiency of their housing stock.

The housing associations financed were: Gallions Housing Association, Origin Housing and A2Dominion. They were provided with loans of £4m each from the fund to finance a variety of retrofit projects, covering fabric improvements, air source heat pumps, lighting and window replacements.

Alongside the funds delivered through the JESSICA Initiative, THFC has also on-lent from European Investment Bank (EIB) loan facilities. The rationale being that JESSICA investments were relatively small and the fixed costs of entering into the JESSICA arrangements made the economics less attractive, unless part of a larger funding initiative from THFC.

The purpose of the EIB lending was for the development of “greener” social housing, i.e. built to Code for Sustainable Homes Level 4 (or better) or for retrofit of energy efficient features to existing social housing.

Details on each of the three projects are below.

A2 Dominion received £4m in funding from the JESSICA London Green Fund via THFC, as well as a £50m loan from EIB. The £4m was used to deliver energy efficiency measures across homes in 32 London boroughs in the period from April 2013 to December 2015.

In that time, there were a number of changes to government policy on energy efficiency and social housing which led to some revision of the initial projects and value engineering to maximise the benefits for residents. The projects were revised and agreed with THFC.

A total of 1,383 energy efficiency measures were installed, benefitting over 1,100 households. The improvements collectively saved an estimated £121,000 in fuel bills, a per household per year saving of approximately £110 (or 10%). The THFC funding also enabled A2 Dominion to attract a further £220,000 of eternal funding, and reduced carbon dioxide emissions by an estimated 377 tonnes per annum.

Perhaps amend to: While Project 3 at Riverside Close primarily funded the 33 flats owned by A2 Dominion, a further 51 leasehold flats indirectly benefitted from the retrofit works. The ECO funding for the project allowed the installation of cavity wall insulation in these 51 flats at no cost to the leaseholders.

The property at St Winifred’s suffered from significant mould and damp issues, leading to high levels of complaints by residents. The winter following the installation of the external wall insulation saw no issues reported.

The replacement of communal lighting with LED has led to considerable energy cost savings for A2 Dominion. Residents have reported improved lighting conditions and fewer luminaire failures, saving on maintenance costs and increasing resident satisfaction.

Gallions (now part of Peabody) applied for £4m of funding from the JESSICA London Green Fund through THFC to carry out planned improvements to homes in Thamesmead, London.

The project was part of Gallions’ long-term plan to upgrade properties to meet contemporary standards on decent homes and energy efficiency. The properties are large concrete panel construction, classified as ‘hard to heat and hard to treat’ in terms of thermal performance.

Roof insulation, energy efficient glazing and doors were installed as part of a cost effective package of impactful measures, after feasibility studies suggested the use of deeper sustainability measures in the regeneration would be prohibitive due to the construction type of the properties.

Over £3m was invested in these measures, resulting in carbon emissions savings of 61 tCO2/annum, based on the replacement of old single glazed metal windows with A-grade uPVC windows across 670 homes (14,290 m2 of glazing in total).

The second stage of the project was the renovation of Parkview Hub to meet PassivHaus equivalent retrofit standards. A timber element system was fitted, including prefabricated timber elements of 380mm-wide filled with blown cellulose fibre insulation. Window frames with triple glazing are factory installed in the elements. Together with prefab roof structures, this method allowed a new building envelope to be installed around the existing properties, while tenants continued to live in their homes, therefore minimising the disruption to residents. Combined with the installation of MVHR ventilation in every unit, the space heat demand was reduced by 80%.

Notes from visit by GLA personnel on behalf of the London Green Fund:

“Part of the £4m funding was used to retrofit the Parkview Hub building. The flats were extremely cold and had a lot of damp and condensation issues.  The investment has helped to improve the standard of living for so many residents. The energy bills were very high as residents tried to keep themselves warm.  The improvement works have had a significant impact.  Residents have noticed massive difference in their energy bills.  Most of them now pay under £20 a month for their energy bills.  During the overall refurbishment solar panels were also installed on the roof from which the Peabody offices and shop fronts will benefit.”

Origin Housing secured £20m of loans from EIB and £4m from the JESSICA funding scheme through THFC, to support the development of new sustainable homes and green improvements to existing stock.

Thanks to the funding, 56 homes saw improvements to thermal performance due to the adding of external and internal solid wall insulation, plus two housing blocks (c.50 units). Carbon emissions savings over the projects totalled 73 tCO2/annum.

Just over £3.7m was invested in the installation of condensing boilers in more than 1,400 homes, leading to an improvement in SAP ratings and carbon emissions savings of 375 tCO2/annum. 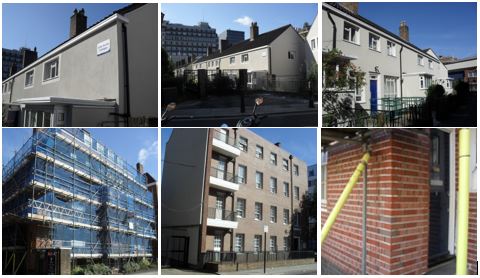