The deal comes hot on the heels of two private placements for the sector, for Midland Heart and Raglan Housing Associations and priced inside both. “While the Midland Heart and Raglan transactions represented good value and were a step change from the pricing of some earlier deals, the demand and execution of this deal shows that public bond deals can still offer the most competitive terms” said Piers Williamson, Chief Executive of THFC. He added: “In the last 10 years there have only been nine long term public deals done under 5%, and THFC has completed 4 of them”.

Market tone has been good with institutional investors viewing HA bonds as delivering value for the pension and annuity funds they manage. There were 21 investors in the THFC issue, including 4 new investors. The book was nearly four times oversubscribed despite price guidance being tightened to well within 2% over Gilts (The31 year non-amortising deal priced at 1.88% over Gilts).

The deal marks the first of a probable number of HA Bonds over the Autumn months, ahead of the expected announcement of more details on Government Guarantees, slated for the Chancellor’s Autumn Financial Statement on December 4.

There were a total of 12 Housing Association participants in THFC’s deal. Amongst them was Riverside Housing Group. Joy Baggaley Group Deputy Chief Executive and Finance Director of Riverside said the attractions of participating in the tap were twofold.

“THFC funding represents a time and cost efficient way to raise long term finance and in particular the flexibility to redistribute security already in charge to THFC allowed Riverside to extract the maximum benefit from those assets.” 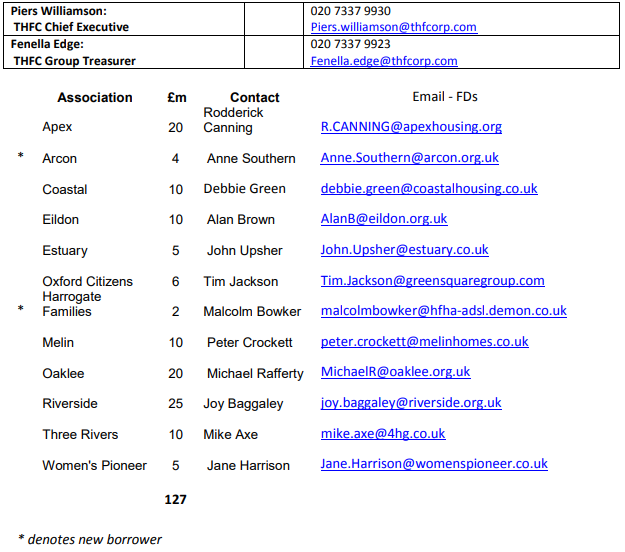 Following the Autumn Financial Statement, the Department for Communities and Local Government (DCLG) have confirmed that the Licence for the.

Only 12 days into the New Year, Affordable Housing Finance (AHF), the Government Guaranteed funding aggregator has brought its 12th.