Lowest cost finance from THFC since onset of Credit Crunch!

THFC took advantage of record low Gilt yields to price a brand new 32 year £100m Bond, its third issue of 2011 at an all in cost of 5.17%. The deal was lead managed by Royal Bank of Canada and Royal Bank of Scotland and was for seven underlying borrowers.

Despite credit spreads widening significantly to 1.80%, the current expectation of a further round of Quantitative Easing (so called QE2) by the Bank of England meant that the yield of the Government Security used to price the bond was at levels last seen before World War 2. The combination of higher credit spreads but a significantly lower reference yield allowed THFC to deliver one of the lowest cost sector bonds seen since before the credit crunch.

The lead order in the bond was from Network Housing Group, a G15 member. At 5.17%, this represents the lowest cost for ultra long term bond financing for a G15 member in over 10 years and assists them in achieving ambitious goals in fulfilling their affordable rents development targets. Eight members of the G15 have issued 30 year + debt through the capital markets since Affinity Sutton’s debut deal in September 2008 and the yield on this and the recent Moat transaction represent the lowest yields achieved to date by a comfortable margin.

“Considering that we priced this deal the day after Italy had been downgraded 3 notches and Dexia was potentially undergoing its second rescue, this is quite an achievement” said Piers Williamson, Chief Executive of THFC. He added “The sector obsesses about credit spreads, but it’s the all in cost of funds which is the enduring feature in the annual report and accounts”.

Widening credit spreads do represent a potential concern for the HA market but, to date, do not appear to be based on a fundamental re-evaluation of the sector. Rather they may indicate that investors who are prepared to put institutional money to work in current enormously volatile markets demand a significant premium. “Investors have taken very large losses through 2011” said Williamson “and they are concerned they may soon find themselves in a re-run of Lehmans”. The latter was a reference to the last quarter of 2008 when, in the wake of the Lehman’s collapse comparable Housing Association credit spreads widened 1.3% from 1.55% to 2.85% in as little as 10 weeks.

The recent change in outlook announced by Moody’s in relation to Hyde HA as well as widespread concern over the impact of changes in Housing Benefit mean that the coming months are far from straightforward for funding Housing Associations. For the affordable rents regime to be successful PWC and L&Q estimate in their recent study ‘Where next? Housing after 2015’ the sector will require net new funding of £18Bn by 2015. Housing Associations represent a relatively safe investment for institutional investors, but current market conditions show that it will be tough for them to keep their cost of funding as low.

Borrowers and other contacts 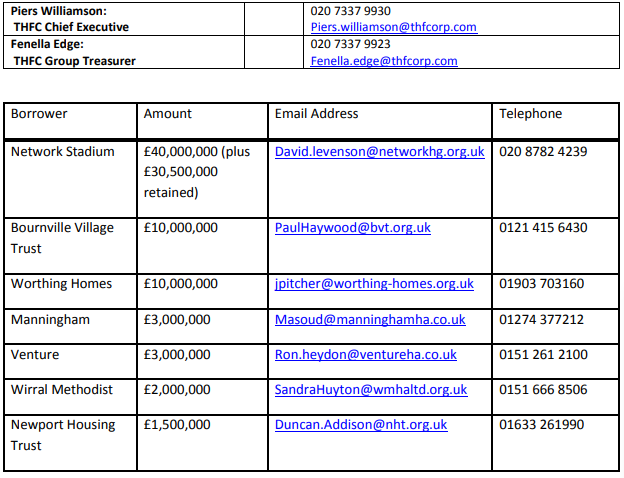 At a time when politicians are bemoaning the lack of formal training for bankers, The Housing Finance Corporation (THFC) has.

At a time when bank pricing is once again increasing for housing associations, THFC took advantage of continued low Gilt.