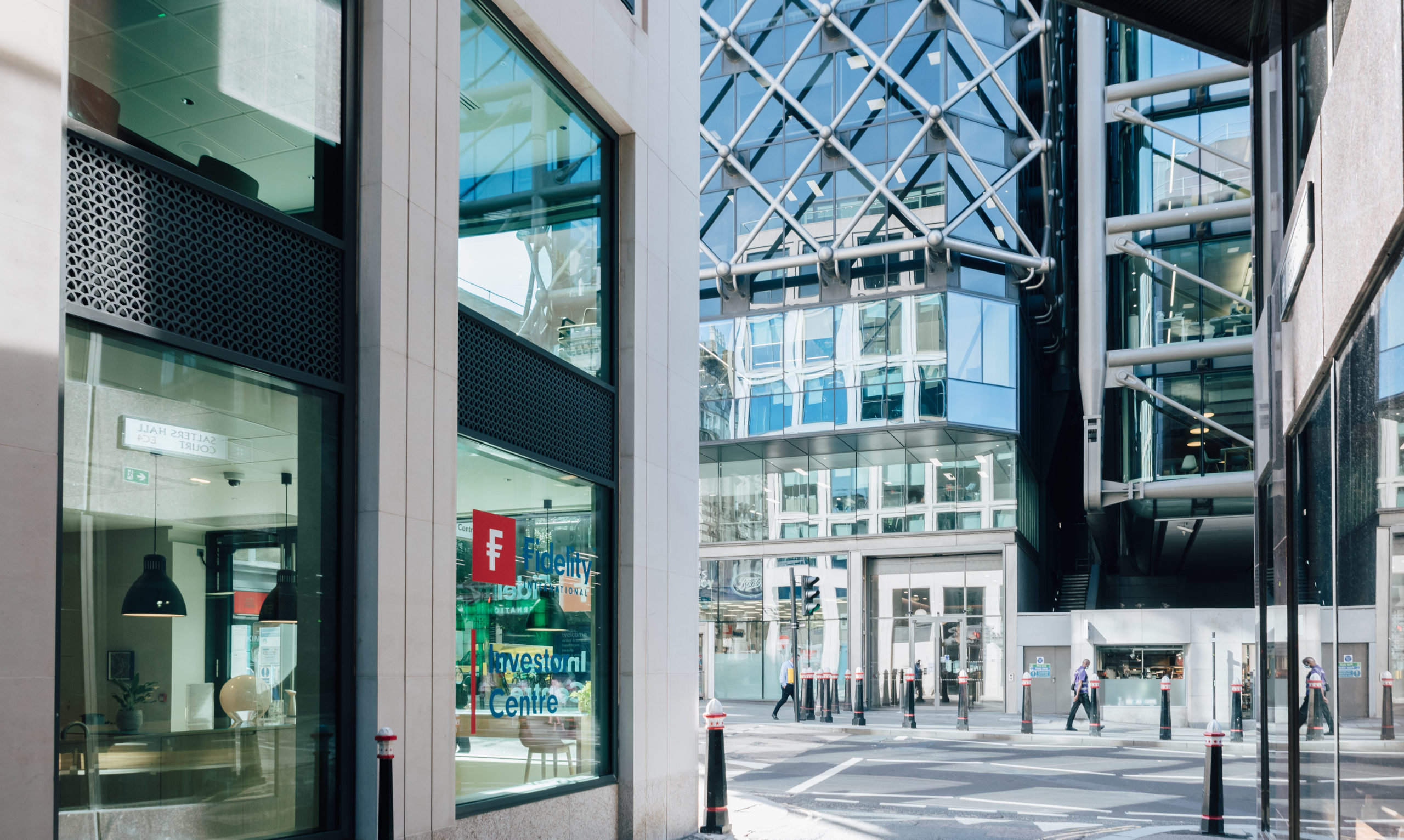 Mitigating against rising rates and in a period of economic uncertainty

In the days after the 16th June, when the Bank of England raised the base rate to 1.25% and reiterated the forecast of further rises to come, markets saw some of the most volatile trading in a decade. In contrast (or perhaps as a result), the Sterling Capital Markets have been unusually quiet, with the volatility and rising rates environment deterring many would be issuers.

A housing association (HA) coming to market now would be likely to price at over 4%; in the context of the rates achieved by HAs over the last two years, as low as sub-2% in some cases, this new state of play seems shocking. The cost of new debt is now roughly the same as the sector’s average cost of existing debt.

Yet there are also risks of deferring decisions on funding exercises. While forecasts of a Bank of England Base Rate of 2.5% within a year seem impossible to many, the fact is that the base rate has been higher than 2.5% for most of its history since being established in 1694. The exceptions were the period during and immediately after the second world war, and the period that began with the 2008 financial crisis.

It is therefore plausible that rates will not only go up to 2.5% but could well stay there. The supply chain issues that are driving a large part of the higher inflation are not just hangovers from the havoc covid wreaked on supply and demand within the UK economy, but reflective of resource competition and geopolitical repositioning in response to the shock to the global economy that covid caused.

Despite this, HA treasurers will be mindful of not allowing speculation on rates to drive funding decisions. But where a future funding requirement is firm, it is not speculative to make an honest assessment about what the interest rate environment is likely to be at the time that the requirement occurs. Indeed, the new paradigm demands that treasurers do just that, and consider about how to reduce the effects of higher rates and higher rate uncertainty within their business plans.

ForHousing joined bLEND in 2022 and were considering the timing of their funding need just as gilt yields really started to rise. They priced on 26th April on a two-month deferred basis over the 2057 gilt, giving an all-in cost of funds of 3.528%, inclusive of a 2 bps deferral premium.

At the time, this was regarded as high, given how recently sub-2.5% rates had been achievable. Yet the decision to price, in spite of the rising rate environment and the volatility in the market, has now been clearly vindicated. Having drawn down funds in late June, should they have waited and priced on a spot basis today they would be expected to achieve an all-in cost of funds 74bps higher at 4.275%.

The funding exercise Valleys to Coast completed through bLEND in July 2021 shows the same effect. Priced on 21st July over the 2054 gilt and with a 9 bps deferral premium, Valleys to Coast secured a 12-month deferred loan at 2.20%. Their drawdown was at the end of July, yet had they waited to price on a spot basis they would be looking at a cost of funds of 4.042%. That’s a saving secured by their decision to take deferred funding of 1.842%, which represents significant value for their business.

At a time when most HAs are thinking about consolidation and building in resilience against the myriad economic headwinds working against the sector, these savings are material, freeing up funds to further support tenants facing an unprecedented cost of living crisis.

In this context, locking in rates allows a treasurer to replace an unknown component in their business plan with something known, reducing uncertainty and exposure to volatility in the markets. With a notable amount of the sector’s debt due to mature within the next five years, there is a real need for treasurers to consider how they plan to approach this issue.

Choice also priced a 12-month deferred loan through bLEND shortly after Valleys to Coast. They priced on 10th August 2021 over the 2054 Gilt of giving a cost of funds of 2.14% when including the deferral premium. Had they waited to drawdown on a spot basis today, they would have found themselves paying 1.902% higher. The obvious pattern is the relative unimportance of the deferral premia attached to these deferred drawdown loans in the context of the rises in the Gilt yield (and to a lesser degree the credit spreads). 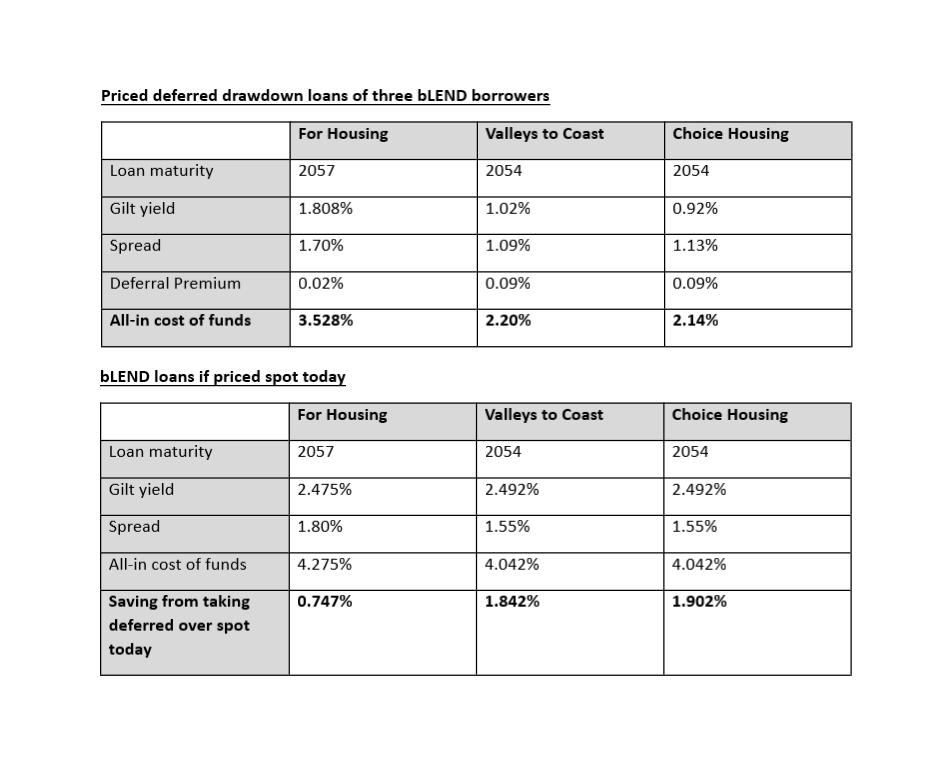 It is not for HA treasurers to try to predict the future, but the rising rates environment requires thinking about pricing and the sourcing of funding in new ways. In the cases presented here, bLEND borrowers used deferred drawdown to lock in their future funding need and mitigate against rising rates and rate uncertainty. Other associations expecting refinancing exercises in the near future may well decide that they need to do the same.

As the sector looks to embed resilience and take stock, it would do well not just to look back at the rates once achieved, but to look forward with unflinching honesty at where they could well end up. This assessment, and the decisions informed by it, will be key to mitigating against refinancing risk in the years to come.

By Will Stevenson, Deputy Treasurer and Relationship Manager, THFC 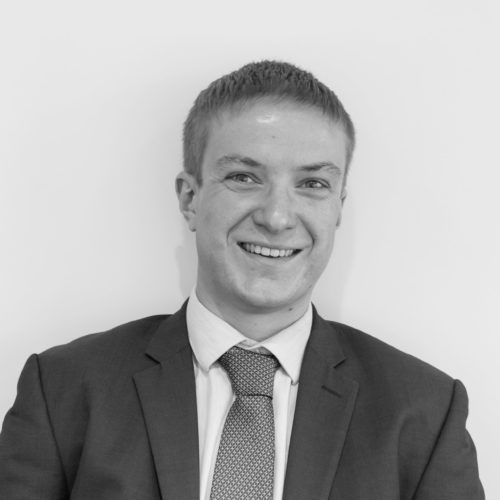