Following the Budget of July 8 the Government guaranteed aggregator Affordable Housing Finance (AHF) has set a positive tone by returning to market with a fresh £208m 28 year bond priced at Gilts plus 0.40%, an effective rate of 2.89%.

“This record low cost is testament to the strength of the guarantee construct. All of the six Housing Associations in the transaction have been subject to updated due diligence since the Budget, and their participation is very real evidence of their continuing commitment to produce affordable homes both for ownership and rental” said Piers Williamson, Chief Executive of AHF. “There is also a larger element of retained bonds in this transaction than previous deals, indicating the prudence of a number of the borrowers in reserving some capacity for future issuance in the light of still emerging policy”.

The 2.89% cost is the lowest yet achieved for a long term bond in the RP sector and is slightly lower than pre- Election levels reflecting the ‘AAA’ guaranteed status of the bonds. AHF’s lowest cost of issuance to date was 2.92% in March 2015 and the lowest level achieved for a public own name bond was Richmond Housing Partnership at 3.30% in January 2015.

The bond was over two times subscribed by institutional investors, despite its comparatively low yield.

AHF’s previous bond at £600m is now the third largest Sterling bond of its kind in issuance (behind two of the European Investment Bank (EIB)’s own bonds) and AHF have been keen to establish a second transaction to grow to benchmark size before the end –date of the Affordable Homes Guarantee Scheme (AHGS) licence in March 2016. “Investors are used to us rapidly growing the size of our bonds through multiple taps and use of retained bonds” said Williamson. “We are already working on the elements of a follow on transaction for after the Summer break”.

The AHGS has so far approved 42 borrowers and sourced £2.3Bn of long term debt from a combination of Institutional Investors and EIB. Two of the borrowers in this transaction (Hexagon HA and Home Group) were repeat borrowers. 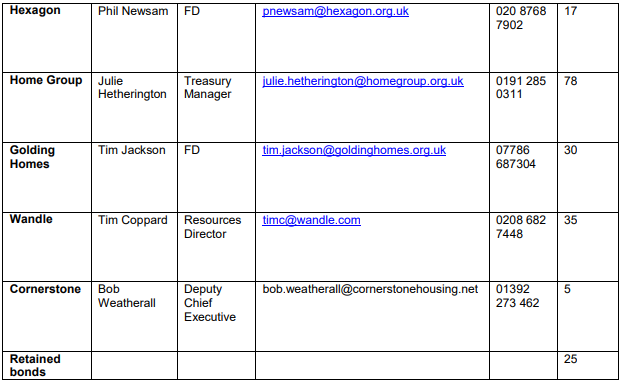 The Housing Finance Corporation today sold £13.2million of retained bonds to be on-lent to housing association Irwell Valley Homes, based.

What is the absolute lowest yield for long term Housing Association (HA) fixed rate Bonds? That has been a recurrent.